Jean Adriel Schloss and her husband Malcolm met Baba in 1931. Later she wrote the book called Avatar.
Jean Robinson was born on September 21, 1892:* She later took the name Adriel through numerology. She grew up to be a tall, regal blonde with a pleasing voice.
​
​As a career, she took up social work in New York City. Later, she married the poet Malcolm Schloss whom she met in his bookstore, “The North Node" in New York. Both were widely read in metaphysical subjects and earnestly seeking enlightenment. Through the bookstore they made many contacts with spiritual seekers in the late Twenties and early Thirties. These proved invaluable to Baba's first visit to America. In 1931, very suddenly, through a young poet, Milo, a contact was established between the Schloss’s and Meredith Starr, who told them a Perfect Master, Shri Meher Baba was expected shortly in England. Jean and Malcolm were set to go, when a cable came in which Baba asked them, instead, to make arrangements for His arrival in America. Through a friend, they obtained a lovely home on the Hudson at Harmon. This was Baba's headquarters for a month in November, 1931.
Jean writes in her book Avatar of her first meeting with Him:

My most outstanding impression of that first meeting is one of peering into bottomless pools of Infinite Love and tenderness, as my eyes met His, My heart pounded with tremendous excitement and for a while I could not speak. I felt that in an inexplicable way He was the reason for my very existence; that I have never really lived until this moment; that He was deeply familiar and precious to me, even as I was no stranger and very dear to Him."

​Baba stayed a month at Harmon, meeting many individuals, contacts of the Schloss’s including Princess Matchabelli and Elizabeth Patterson. It was a time of intense unfoldment for both Malcolm and Jean. It took Malcolm, skeptical of the need for any outer Masters, longer to surrender** — 11 days, he reports. Baba named the American group "Jeanco"; it included the Schlosses, Elizabeth Patterson, Norina Matchabelli Nadine Tolstoy and Anita de Caro; He intimated they were all in His Circle.

-From Awakener Volume 19 Number 1 p.53
The provenance of this photo collection is as clear as almost any from this era. It is believed that those who lived with Baba in India would often take pictures of Baba and outings with the mandali, and then just trade prints back and forth. What we know is that Jean Adriel gave her photos to Margurite Poly, who left them to Teri Adams in her will. Teri lovingly donated them to Eruch Adams who made them available to the Meher Archive Collective for safe keeping and sharing.

​Here is just a sample of the prints:

Within the photo collection of Jean Adriel was found a nearly intact set of "accordion" fold prints. These were connected at the side edges in a way where they could be folded together. By and large, these photos are presented in order as they were taken. The first image has a few singles and one connected double which could be partially out of order, but it's likely that this is the correct order.
Jean Adriel also made some notes on the backs of a few of the photos. It is likely that Elizabeth Patterson took these, but it is not confirmed. They show up in her collection in addition to this usual set in Jean Adriel's. Also a partial set was in Adele Wolkin's photos, though they had a much stronger sepia tone. 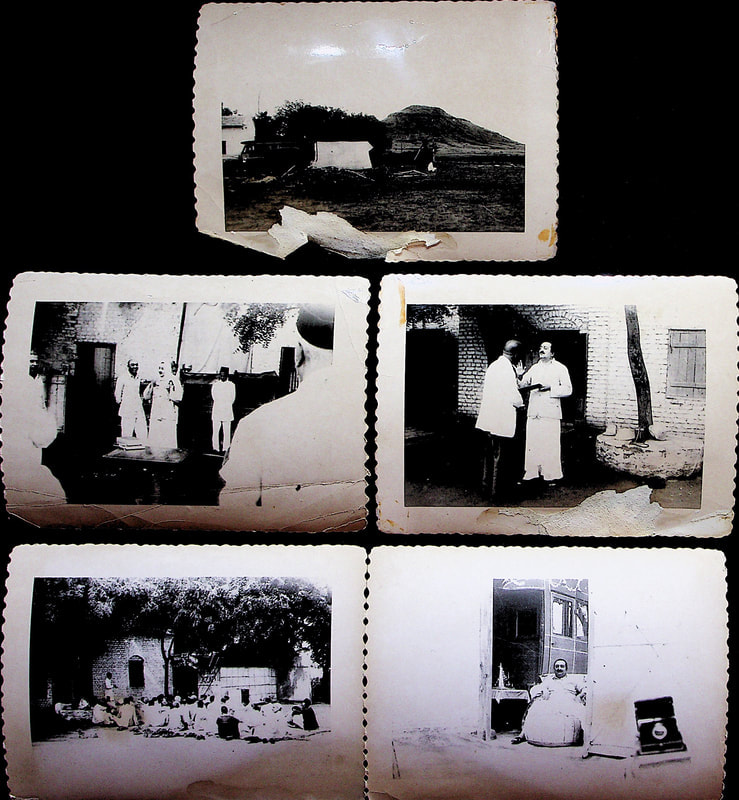 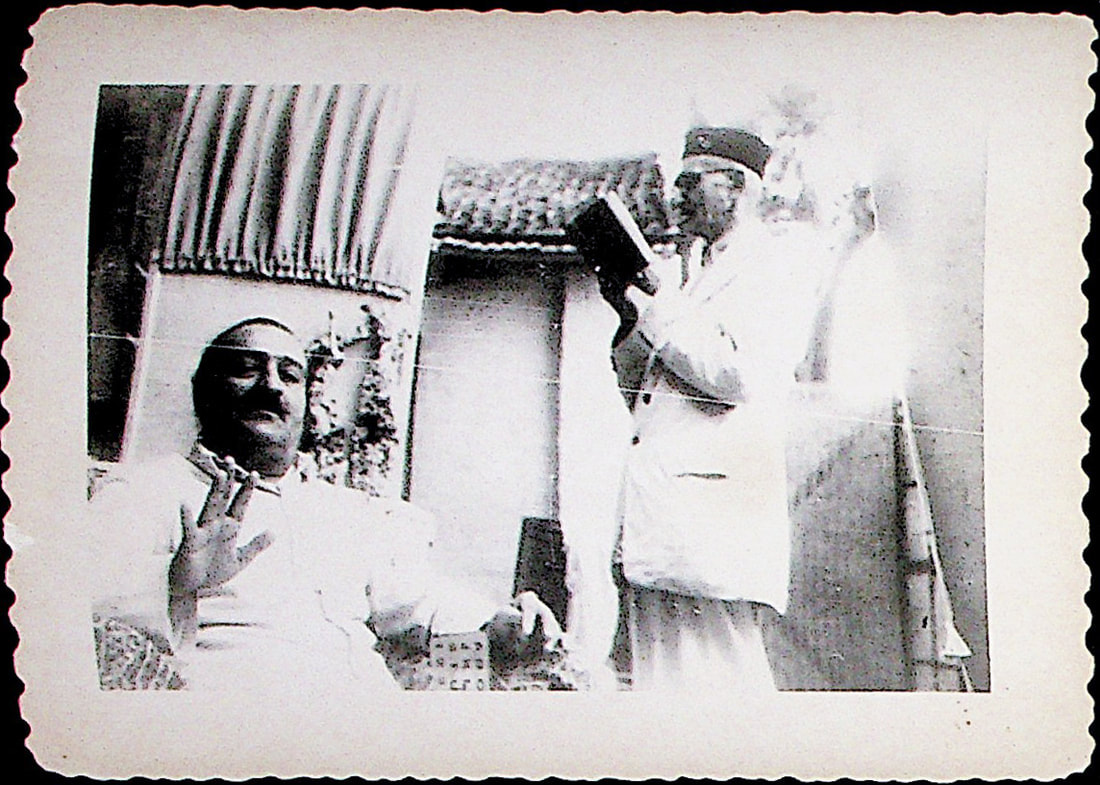 ​[From Lord Meher]
The work was finished by 19 June.

A meeting was scheduled for Tuesday, 21 June 1949, regarding Baba's upcoming seclusion. Jal Kerawalla and Eruch arrived in Meherazad on the 19th at 6:30 P.M., and Meherjee and Nariman arrived from Bombay the next afternoon. Baba had invited all 28 Meherabad mandali to the meeting, as well as other close lovers from Poona, Ahmednagar and Bombay, and they were to arrive at Meherazad on the 21st, at seven o'clock in the morning. A total of 150 persons gathered that day. Eruch and Kaka had decorated the seclusion area with Baba's seven-colored flag, a painted photograph of him and large golden letters that spelled out MEHERAZAD.

​Baba began the meeting by stating, "I have called you all here to take part in the purification ceremony to cleanse the atmosphere, and keep it free from maleficent spirits and evil influences."

​Baba then called on Kalemama, Khak Saheb, Don and Kaikobad to recite particular passages from the Gita, Koran, Bible and Avesta respectively; and, as they were reading, Baba would intermittently explain the meaning of the selected passages.
When Don stood up to read the Sermon on the Mount from the New Testament (King James Bible), Baba said, "This is my favorite section in the Bible."

​And seeing the multitudes, [Jesus] went up into a mountain; and when he was set, his disciples came unto him, and he opened his mouth, and taught them, saying: "Blessed are the poor in spirit, for theirs is the kingdom of heaven. Blessed are the meek, for they shall inherit the earth ... "

​The reading ended with the Lord's Prayer. After the other readings, Baba stated:

​These are all but different approaches to the same one Truth — God; and therefore the real purport of each book is just the same. These approaches can be broadly divided into two kinds — indirect and direct: that is, impersonal and personal. In spite of such distinctions, equally same results can be achieved and have been achieved through either of the ways.

What can be understood in a flash by spiritual experience takes ages to grasp intellectually.
As regards my seclusion, I have 100 percent reasons of my own to retire from tomorrow for 40 days. This should not be looked upon as chilla-narsi [penance of remaining in a circle] or meditation and so forth. I am free in every way, but I am going to get myself bound voluntarily. I will also intensify my silence, and will not let even the least sound escape my lips.

​Baba then asked Deshmukh to perform kirtan, which he did. Wrapping a turban round his head similar to a kirtankar (singer), he sang and spoke Baba's praises in verse and prose. Baba distributed prasad and the mandali returned to Meherabad at 11:00 A.M. Eruch went back to Poona, Ghani to Lonavla, Meherjee and Nariman to Bombay, and Deshmukh to Amraoti.  Jal Kerawalla stayed in Meherazad.